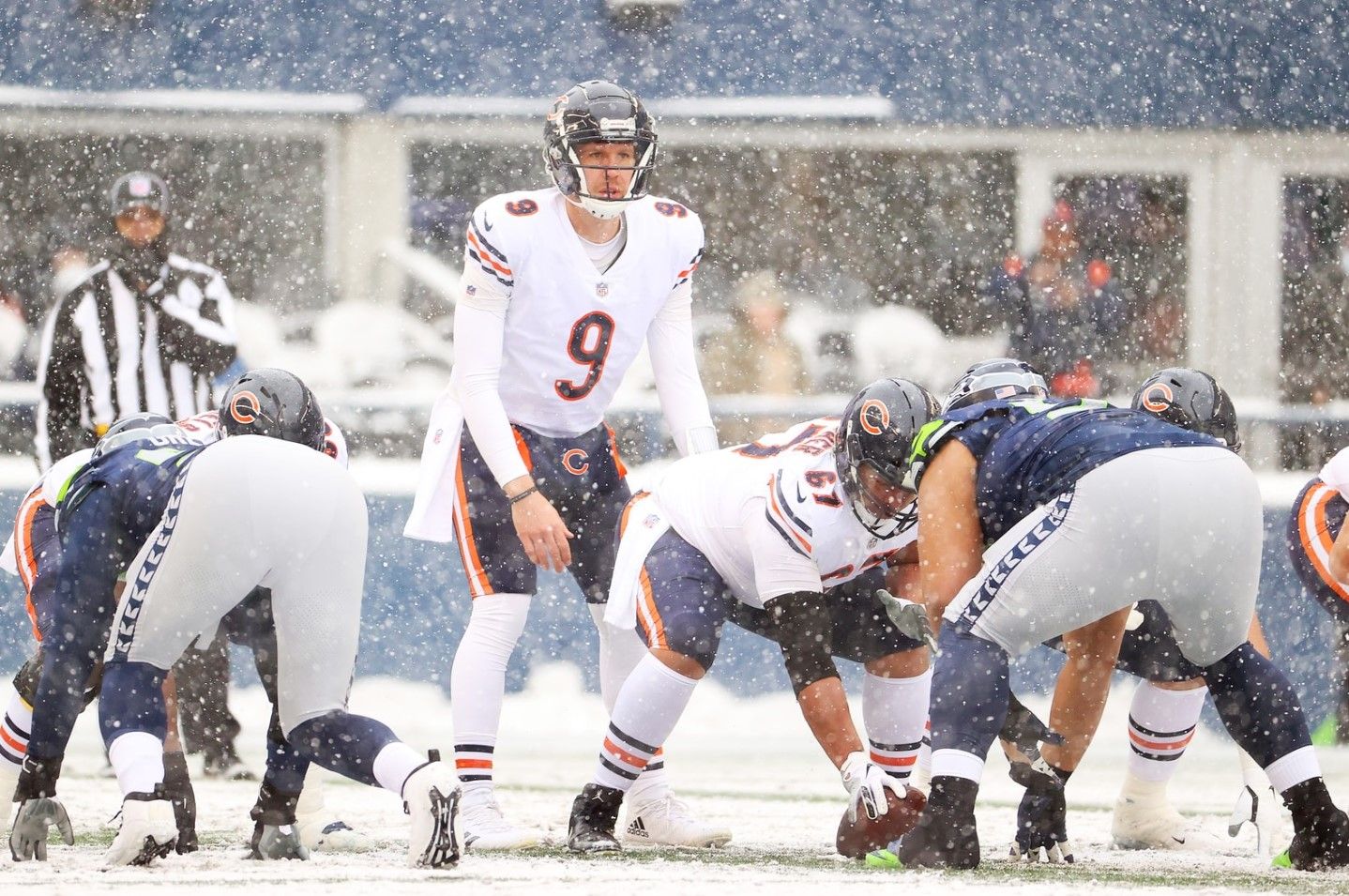 SEATTLE (AP) — Nearly a year after he last took a snap in a game, Nick Foles showed he still has some of that Super Bowl MVP talent in his right arm.

Jimmy Graham caught a 15-yard touchdown pass from Foles with 1:01 remaining, Damiere Byrd made an acrobatic reception for the 2-point conversion, and the Chicago Bears beat the Seattle Seahawks 25-24 on Sunday.

“The last couple years haven't been the easiest, but at the end of the day you can still find joy in little things each and every day,” Foles said. “So going to work and being in a locker room with the guys that care for one another, that’s what I look at and that’s what I’m grateful for.”

Making his first start since last season, Foles led the Bears 80 yards in the closing minutes, capping the drive with his TD toss to Graham, who spent three seasons with the Seahawks. Graham posted up a pair of smaller defensive backs to make the catch in the corner of the end zone, his third TD of the season.

On the 2-point attempt, Foles threw late, but Byrd got his knee down in the end zone with multiple Seattle defenders trying to push him over the back line.

Foles started seven games for Chicago last season before a hip injury suffered in Week 10. His only other action came in a Week 16 blowout win over Jacksonville on Dec. 27, when he was in for a handful of snaps and threw one pass.

Foles started against the Seahawks after rookie Justin Fields was ruled with an ankle injury.

“I’m happy for Nick that he got an opportunity today,” Bears coach Matt Nagy said. “Not happy for how it happened with Justin and Andy (Dalton), but Nick’s always going to be prepared and for him to be able to come into this moment, he’s been there, done that a lot of different ways.”

Foles finished 24 of 35 for 250 yards, and David Montgomery and Khalil Herbert each had rushing touchdowns. Montgomery had 21 carries for 45 yards and seven receptions for 61 yards. The Bears (5-10) had lost three straight and seven of their previous eight.

“I don’t really care what the record looks like. It is what it is. But to get a win with the guys in there knowing the kind of character they've got feels amazing,” Montgomery said.

It was a stunning conclusion to rare snow game in Seattle that eliminated the Seahawks (5-10) from the NFC playoff picture. Seattle was already assured of a losing season, and coach Pete Carroll reached double-digit losses for the first time in his tenure.

Russell Wilson was 16 of 27 for 181 yards and two touchdowns, including the first TD for DK Metcalf since Oct. 31, a 41-yarder in the first quarter. Gerald Everett caught a 24-yard TD late in the third quarter that gave Seattle a 24-14 lead.

Rashaad Penny rushed for 135 yards and a score for the Seahawks, who lost for the second time in five days. Last Tuesday's game at the Rams was pushed back two days because of Los Angeles' COVID-19 issues.

“That was about as disappointing a loss as we’ve had,” Carroll said. “We were in control in so many ways in that game to go win it and put it away and we just never did, and let them stay alive. They found a way to make their plays.”

Seattle entered with a mathematical shot at reaching the playoffs but couldn’t hold onto a 17-7 halftime lead. Jason Myers missed a 39-yard field-goal try midway through the fourth quarter that would have given Seattle a 10-point lead. That came after Wilson was sacked by Robert Quinn with Seattle inside the Chicago 10 on third down.

Given the chance to rally, Foles came through. The Bears took over at their own 20 with 2:56 left. Foles hit Darnell Mooney for 30 yards, and a roughing-the-passer penalty moved Chicago to the Seattle 35 in one play. Foles connected with Montgomery on consecutive plays and Chicago was at the Seattle 11 with 2 minutes remaining.

After a strip-sack by Carlos Dunlap that Chicago recovered, Foles hit Graham on third-and-14 and Nagy didn't hesitate to go for 2.

“We locked eyes and he ended up throwing it and I just knew I had to go up and get it," Byrd said.

Seattle played its third home game with snow since Lumen Field opened in 2002. The storm hit the Seattle metro area in the early hours of Sunday morning and dropped a few inches of snow throughout the Puget Sound region. Roads were difficult to traverse and the stadium was as empty as it’s been in recent memory for a Seahawks game.

Most of the snow stopped falling by halftime, but a small layer covered most of the field throughout. Seattle also played snow games in December 2008 and November 2006.

Seattle linebacker Bobby Wagner set a franchise record when he recorded his 168th tackle of the season late in the third quarter. Wagner entered the week leading the NFL in tackles and had 12, giving him 170 for the season.

Quinn has 17 sacks, tied for the second most in Bears history behind Richard Dent's 17 1/2 in 1984. Quinn has 15 career sacks against Seattle.

Seahawks: Home vs. Detroit next Sunday. Man wounded after shooting at police on patrol